What is a colonoscopy?

Colon cancer begins as a slow-growing, small growth in the colon or rectum area. Over time, these precancerous growths – called polyps – can turn into cancer. Colonoscopy is a screening test that checks the inner lining of the large intestine for polyps. It provides the best diagnostic accuracy of all detection methods. Additionally, it offers benefits of no pain, no incision, and only a short time needed for both preparation and procedure. A colonoscopy will detect most small polyps and almost all large polyps and cancers. Thereby, it substantially reduces the risk of developing and/or dying from colon cancer by up to 90%.

SEND AN INQUIRY OR SCHEDULE AN APPOINTMENT

Colonoscopy once every 10 years, for adults above 45, reduces colon cancer mortality by more than half.

Who is it for?

The American Cancer Society recommends people above the age of 45 to get a colon cancer screening because they have higher risks. However, that does not mean that people younger than 45 have no chance of developing colon cancer. Click here to learn warning signs, symptoms and risk factors.

Colon cancer studies conducted in the United States recommend that patients undergo a follow-up screening approximately every 10 years. The studies warn, however, that 6 – 8% of patients whose first screening identified interval cancer in a subsequent screening 10 years later. This indicates that, for some patients, one screening every 10 years is too infrequent. Many observers therefore recommend that the interval between each screening should be reduced to seven years or five years. However, there is still disagreement on this point. Finding the correct frequency of screenings will depend on the individual profile and symptoms of each patient. Some patients may not need to wait 5 – 10 years, they may need to wait just two years. The doctor will therefore consider each patient on a case-by-case basis.

How does a colonoscopy work?

Subsequently, through a medical collaboration with Sano Hospital in Japan, Samitivej adopted Narrow-Band Imaging (NBI) International Colorectal Endoscopic classification (NICE) with magnification. This is the most validated classification system for the detection of colorectal polyps. NBI is an imaging technique that uses a light spectrum of blue and green wavelengths to stimulate hemoglobin (Hb) (an important molecule carried by our red blood cells). As the hemoglobin molecules absorb the blue and green wavelengths, nearby blood vessels will start to appear a dark brown in color. This allows us to see the epithelium and shape of the blood vessels more clearly due the contrast in color. NBI also enables us to magnify these images, so that the doctor can see the shape of the blood vessels in maximum detail. As a result he/she can immediately distinguish the depth of any invasion of cancer cells in the tissue.

The composition of cell tissue in a colorectal polyp, as seen by NBI, can be divided into three types called NICE classification:

NICE 1: The polyp’s cell tissue still has a normal composition. In this case, the doctor will order follow-up checks to monitor the development of the polyp. However, he/she will not need to remove the polyp because the chances of it being cancerous are still very slim.

NICE 2: The composition of the cell tissue looks similar to a net, which indicates that the cells could eventually become cancerous. The doctor will therefore remove the polyp immediately using a coil or a special type of electric knife.

NICE 3: The cell tissue appears wild and disorderly, much like cancer cells. In this case, the doctor may not remove the whole polyp using a colonoscope, but may use tissue acquisition instead. The patient will need a consultation with an oncologist to assess which method of removing the polyp is most suitable.

The use of the NBI technique gives a more precise diagnosis. It also makes it easier for the doctor to devise a treatment plan. NBI can identify even the smallest polyps, as little as 5mm in diameter. This, thus, allows the doctor to calculate as accurately as possible whether the polyps pose a risk to the rest of the body. With a white-light colonoscopy, however, such small polyps might go unnoticed.

Still, the effectiveness of any colonoscopy using NBI largely depends on the expertise of the doctor and his/her mastery of the technique. It depends specifically on his/her adeptness at reading the results of the epithelium screening. Moreover, since there are only a small number of doctors who are experts in this technique, hospitals often overlook NBI as a screening option. This should not be the case, however. Infact, NBI offers a safe alternative to chromoendoscopy, as doctors just need to inject the patient with a dye or stain.

Artificial intelligence (AI) can be used to assist in colonoscopy procedures as a way of developing higher quality detection through increased accuracy when identifying polyps, which are the most common cause of colon cancer. Some polyps are so tiny or hidden away that a traditional colonoscopy makes them difficult to spot. However, doctors using AI technology are now more likely to detect such polyps. Additionally, AI can also help to reduce colonoscopy procedure times, giving doctors the feeling of having an extra pair of hands and eyes when trying to spot polyps located in the patient’s colon. This allows for the polyps to be removed immediately during the colonoscopy, avoiding unnecessary hospital stays and surgeries for patients.

How is it done?

During colonoscopy, if specialists find large flat polyps, they will apply the Endoscopic Submucosal Dissection (ESD) technique. This procedure allows the removal of polyps without the need for open surgery. This minimizes surgical risks, removes the need for abdominal incisions (scarless), shortens hospitalization, and allows patients to recover much more rapidly. All of this enables patients to return to their normal lifestyle more quickly, reduces complications and increases safety levels. ESD is a new scarless surgical technique implemented by Samtivej Hospital as a result of its collaboration with Sano Hospital, Japan’s leading private hospital specialized and advanced in gastrointestinal (GI) endoscopy for advanced diagnosis and therapeutic via endoscopy.

How to prepare for a colonoscopy?

The first step is to visit a doctor to evaluate your situation and suitability. If you take medications or supplements, inform the doctor. This is important, as you may need to adjust your dosage or stop the medications until after the colonoscopy.

After making an appointment for your colonoscopy, you should take the following steps:

Samitivej has a team ready to help and provide services for:

The Liver and Digestive Institute in Bangkok uses innovative, state-of-the-art medical equipment necessary to provide speedy, accurate and reliable screening for a complete range of gastrointestinal and liver disorders including liver infections, alcohol poisoning, cirrhosis, fatty liver disease, pancreatitis, gallstones, stomach cancer, colon cancer, and many more related conditions. Our team of expert gastroenterologist and hepatologist has experience from within Thailand and abroad.

You can consult our specialist online to find out about the treatment options most suitable for your condition via Samitivej Virtual Hospital. To schedule an appointment or for more information CLICK HERE.

SEND AN INQUIRY OR SCHEDULE AN APPOINTMENT

"If it is time to get colonoscopy, you should; It’s important." - Dr.Korn told Michael that, because he is over 50 years old, he should get a colonoscopy. Knowing the risk of colon cancer increases with age, Michael agreed to the procedure. The colonoscopy showed there was a polyp present, and Dr. Korn had reason to believe it was active. read more..

"I’ve learned first hand that a colonoscopy is very useful" - Ms. Williams started to notice changes in her energy and digestion. She decided to visit Dr. Morakod. What Dr. Morakod discovered during a screening were multiple, read more.. 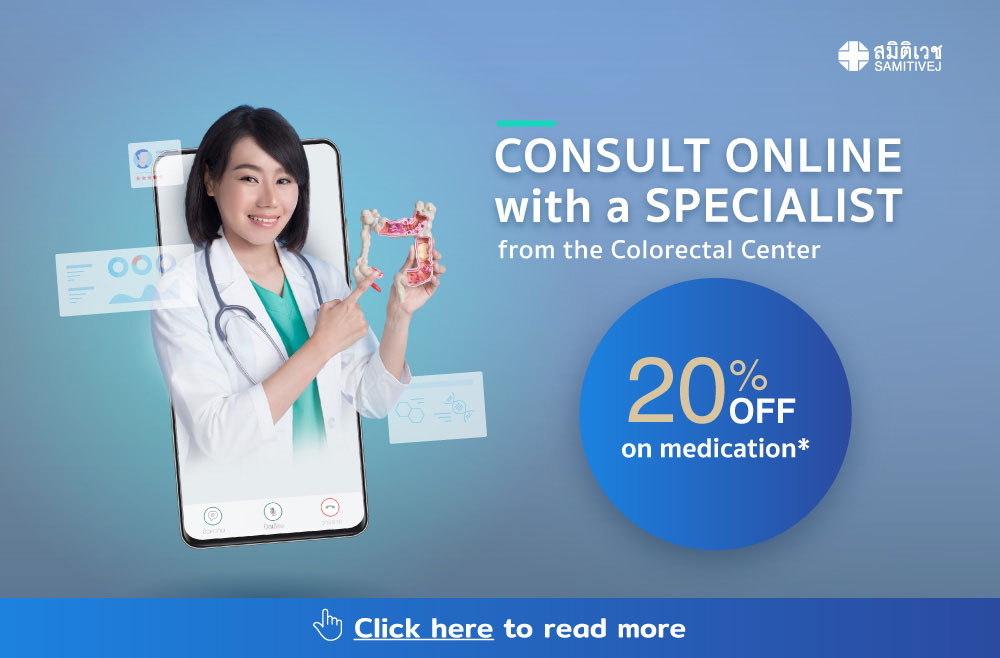