Unlike fever, which produces obvious symptoms, children with scoliosis generally do not exhibit any symptoms unless the curve of the spine is severe. Scoliosis can be found in newborn babies up until teens, although it is much more common in teens. While there are many causes of adolescent scoliosis, the exact origin of the condition is unknown in about 80% of patients. Genetic predisposition may contribute and it can run in families, so a child may have a brother or sister with the condition. In some families, an only child can be found with congenital scoliosis. According to research findings, scoliosis requiring treatment occurs in 1 in 10,000 Thai children. However, there are also lot of children with mild scoliosis that do not need treatment. During these days, the condition is more frequently found in children because parents pay more attention to their children and there is an increase in the number of orthopedics specialists who will detect the deformity sooner rather than later. Scoliosis can be categorized into different types: 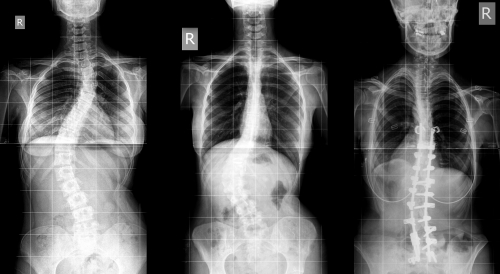 Parents can check their children’s spine to see if they have signs of scoliosis. The examination requires the child to stand erect so as to check for any curvature in the spine. Next, ask the child to bend forward with hands touching the floor and check for any curvature of the spine. If the spine looks straight, it is normal. However, parents should seek medical attention for diagnosis and follow-up so as to evaluate whether the symptoms will worsen over time if any of the following signs are observed:

Scoliosis during adolescence which remains untreated will get progressively worse and cause significant health problems such as tilted body, lowered shoulder, tilted waistline, physical disability, back pain, breathing problems, pant, pneumonia, lung infections, and causing the heart works too hard which may lead to heart failure.

In addition to looking for any abnormal conditions, the doctor will also check the nervous system. Radiographic tests may be required for more detailed diagnosis and evaluation so as to determine the severity of the disease and assess the bone age of patients.

Physical therapy: This approach involves adjusting sleeping and physical positions, as well as appropriate exercises to restore the spinal balance or attain its nearest alignment. Specific treatment varies according to each individual case. However, the treatment should be performed under the supervision of a trained therapist for maximum efficiency Samitivej’s New Life Fund was established to provide underprivileged children with access to high quality surgical treatments. Through the generous donations of the foundation and the hard work of our doctors, children suffering from scoliosis have the opportunity to receive treatment and grow up to be strong, healthy adults.

In honor of His Majesty The King’s 88th birthday in 2016, Samitivej’s New Life Fund also aims to perform eight surgeries on underprivileged children suffering from scoliosis.

More from this section