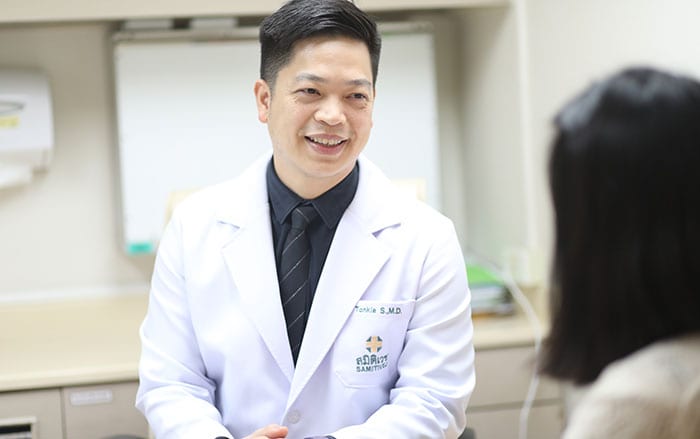 Title: Although it is not a disease or a danger to health, profuse sweating from the palms can significantly affect your life as it causes annoyance as well as a loss of confidence and self-esteem. I used to undergo treatment for the symptoms. However, after studying the condition further, I found that there was a surgical option available that I decided was right for me and which did not disappoint.

Dr. Tonkla: Sweaty palms is not considered a physical illness. However, it can affect the emotional wellbeing of the sufferer, causing irritation due to the slipperiness as well as loss of confidence alongside increased anxiety that can impact the patient’s daily life or career.

This case was a lady who was around 20 years of age and a teacher. She began to experience abnormal sweating on the palms of the hands, under her arms and on the soles of her feet. But due to her relatively young age, she was unaware that what she was going through was irregular in any way, mistakenly thinking the sweat was most likely a result of the hot weather. However, when she observed her friends, she began to realize that her sweating was abnormal because it continued despite her being in an air conditioned room where her friends were not sweating at all. Sometimes the sweating would be so severe that it would drip onto documents she was holding, damaging them with the moisture.

The patient: There isn’t anybody in my family with the same condition. At first I was worried that I may have a heart condition. I began to read various articles online about the symptoms I was experiencing. I found out that this wasn’t a result of an illness but it still took me a long time to decide on how to treat the condition because I was afraid of surgery, although I eventually chose to find somewhere that could treat my sweaty palms. I came in for an appointment with a specialist in treating this condition—having found him from my extensive Internet searches that began as soon as I completed my degree studies—and soon decided on surgery as it was the most effective form of treatment available.

The doctor explained the side effects that may arise both pre- and post-surgery. Once we’d spoken at length and I fully understood all the steps involved, we made an appointment for the surgery to take place, which we decided should be during school holidays so that it wouldn’t affect my job.

On the day of surgery, I underwent a full health assessment, including a blood test and X-ray, while I was expected to fast from solids and liquids for around 8-10 hours prior to the procedure, which then took approximately 1-2 hours to complete.

I felt a difference as soon as I recovered from the surgery. My hands no longer sweated like they used to. It’s been over a month since the procedure now and the sweat has disappeared, my hands are dry and it feels great not having to worry as I previously did. I can pick up objects with no issues, working without problems and feeling confident that my hands won’t make my students’ work wet any longer. I’m so much happier now!

Dr. Pornpeera: The form of treatment that provides long-term results for idiopathic hyperhidrosis or hyperhidrosis not resulting from other health disorders, such as thyrotoxicosis, is thoracoscopic surgery. Surgery involves inserting the camera into the autonomic ganglion via the underarm and lung cavity, where it is used to disrupt the nerve system responsible for sending signals to the under arms and hands, in order to halt sweat production in those locations. The surgery takes a mere 1 – 2 hours to complete, while an overnight stay in hospital is all that is required for recovery before being allowed to return home.