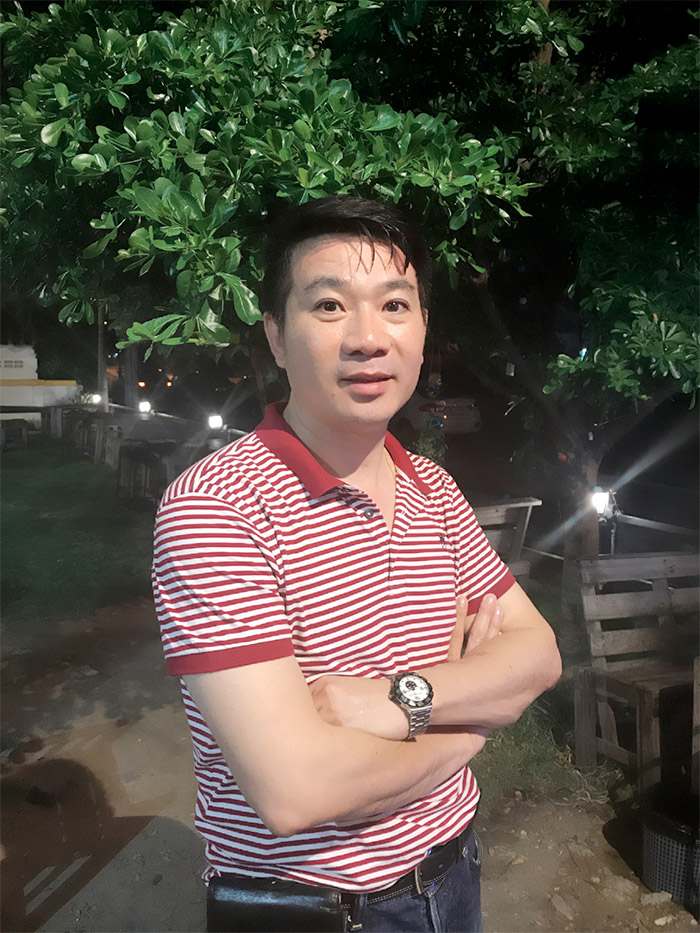 The reason I had to undergo spine surgery was due to an accident. On the day of the accident, I went to the Wooden Mon Bridge in Sangkhlaburi. I didn’t think anything of it—children and young people were jumping from the bridge, and in the fun of the moment, I decided to try to jump as well. The result, however, was that because of my inexperience, my posture while jumping was not quite correct, which resulted in a back injury due to the impact I made with the water. My back did not make a straight, direct impact with the water, but as I hit the water, I suddenly felt numb and lost control of both of my legs. I realized I had jumped into very deep water and I had to use just my arms to paddle and keep myself afloat until I was able to grab hold of another young person who was swimming and helped me reach the shore. Some of the onlookers then helped to put me on the back of a motorcycle and take me to the local hospital. At that time, I felt like I could not lift my right leg. At the local hospital they checked my symptoms and then recommended that I be transferred to the main hospital in the province in order to see an orthopedic specialist. So I called for consultation with Samitivej first to ask whether they had any cases like this before, whether it could be treated, etc., because my family have been patients here and we trust this hospital, the reputation of the medical teams and personnel, and their service quality. Once I received the answer from Samitivej, I was transferred immediately to their hospital and when I arrived, Dr. Paiboon and his team were already waiting and ready to receive me.

Once the doctor had examined me thoroughly, he then gave me the results of the x-ray and provided a detailed explanation of my treatment guidelines and plan; how I would be treated, why I had not yet undergone surgery immediately, and so on, because before I had arrived, I had been directed by the first hospital to abstain from food and water in order to prepare for immediate surgery. After the doctor at Samitivej explained everything to me, I felt much more comfortable and at peace. When the day came that I was ready to undergo surgery, they asked me if I was afraid. Yes, I was afraid somewhat, but at the same time I felt sure that the results would be good as I was in the hands of a medical team that included medical professionals who specialized in this field.

After surgery, once I had recovered completely from the anesthesia, I had a lot of pain in the area of the surgical wound. After 2-3 days had passed, I began to improve, but I felt that my legs were still weak. The doctor then recommended that I begin some physical rehabilitation. Finally, about 10 days after surgery, the doctor told me I could try to get up and walk — and I could do it! As of today, I am quite certain that I will regain my full ability to walk once again, although there may be some side effects. I know it will take some time to recover as I undergo the physical rehab as per the doctor’s instructions and suggestions.
The doctor provided me with excellent care and advice and came to see me every day throughout the entire time I was admitted to hospital. I know it was definitely not a mistake I made that day when I decided to transfer to Samitivej for treatment. Honestly, I never thought I would ever have to undergo spinal surgery and so I had never sought out any information on it and had no idea who the right doctors for my case would be, but I chose this hospital because of my confidence in the hospital and the medical team here. 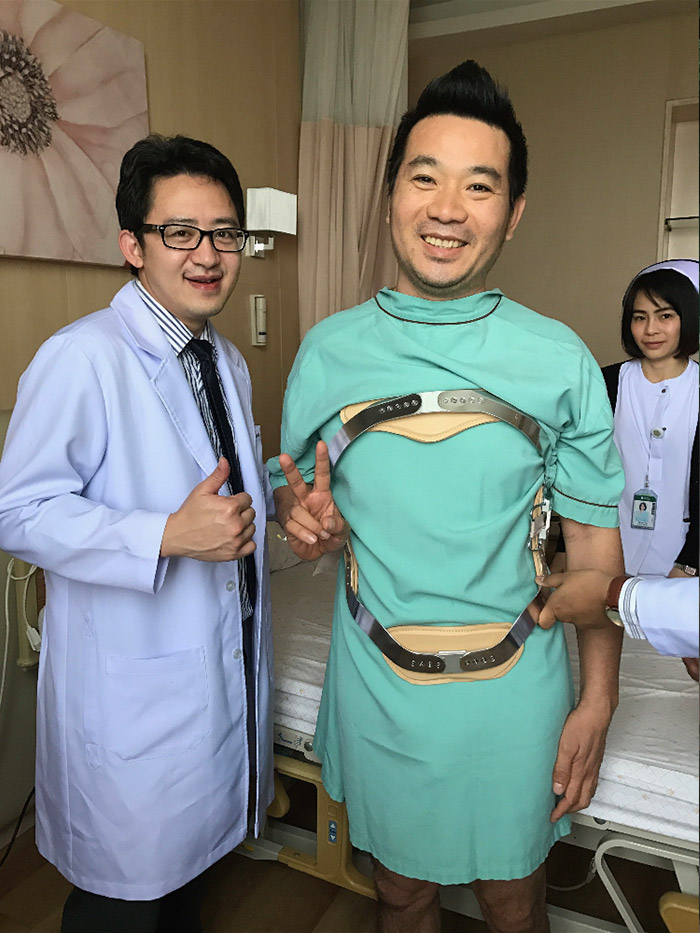 This patient’s case was sent to  us from a hospital in an upcountry province. The cause of injury was an accident that caused a powerful impact to his spine. After a thorough physical examination and assessment of his injury, we found that his spine was broken and there was damage to the spinal nerves in the middle area of his back. The bones were pressing on his spinal cord, causing the patient to be unable to move his lower body. After the medical team evaluated all the symptoms and shared their opinions, it was decided that the best course of action would be to perform surgery for treatment of the patient’s broken spine, using screws to fix and hold the damaged bones in place and then working to repair the spinal cord compression using special techniques.

After surgery, the patient rested and we closely monitored his condition and progress until the danger had passed, at which time we allowed him to begin to start physical rehabilitation and walking practice under the close supervision of a doctor at all times. We found that the patient recovered very quickly and his strength returned in his legs speedily. This meant he would be able to walk again, though he would also need to be closely supervised by a doctor in order to monitor any possible complications that could arise.