French patient with spinal injury made a recovery at Samitivej 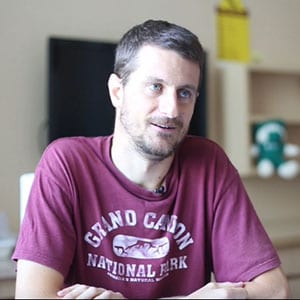 When French national, Vincent Xavier Lalanne, suffered a serious back injury from an accident at a waterfall, it threatened to turn his idyllic family holiday in Thailand into a nightmare. Faced with the risk of paralysis if he failed to receive the appropriate treatment, Vincent was referred to Samitivej Hospital by his insurance company. Fortunately, the expert care he received from Dr. Paiboon Kityadhiguna, M.D. and his team at Samitivej ensured that Vincent made a full recovery and was able to return to France with nothing more serious than a lesson learned on the dangers of jumping into pools before testing the depth of the water.

An Accident in Paradise

Vincent was enjoying a family holiday on Koh Kood and its surrounding islands when a simple misjudgment almost left him paralyzed. While exploring a waterfall, Vincent jumped into what looked like a pool of deep water. Unfortunately, he hit the bottom of the pool hard and was immediately in severe pain.

Vincent had, in fact, broken a bone in his back. However, despite the severity of his pain, he did not realize the seriousness of the injury initially and placed himself at risk of worsening the condition. A condition that if left untreated could have led to paralysis.

“At the beginning, we didn’t know that it was a broken bone,” explained Vincent. “We thought it was a muscle, so we came back to Bangkok by bus and boat.” However, when the pain didn’t reduce after two days, Vincent finally visited a hospital for an x-ray, which confirmed the extent of his injury.

“When I came back to my hotel, I called my insurance company to inform them about the situation,” said Vincent. “It was at that time that they asked me to come to Samitivej Hospital and contact Dr. Paiboon.”

Dr. Paiboon Kityadighuna is an Orthopedic Surgeon at Samitivej Srinakarin Hospital who took up Vincent’s case. “He is French, aged 34 years. He was transferred to our hospital after he had had an accident while visiting a waterfall. When he came in, he was suffering from severe back pain. He was unable to move for approximately three days prior to his arrival here.”

Before deciding on the correct course of action for what was obviously a very serious case, Dr. Paiboon wanted to be sure he had an accurate diagnosis and all the necessary information. “The patient had been diagnosed with a fracture vertebra as a result of his accident,” explained Dr. Paiboon. “It was found that the vertebra in the 9th position had been fractured quite severely. This significant displacement caused by the fracture led to pressure being put on the spinal cord. Hence, we had a discussion and sent the patient for additional screening, eventually deciding that he would require surgery.”

If the injury aggravated there was a risk of paralysis so the decision to perform surgery was made as soon as the diagnosis was confirmed. Within eight hours of Vincent’s arrival at the hospital, he was placed under general anesthetic and underwent surgery to treat his injured spine.

While he understood the need for an operation, Vincent was naturally nervous due to the serious nature of the surgery. “I had a talk with Dr. Paiboon when I came here, and he explained the situation to me,” Vincent told us. “Before the surgery, I was skeptical because we have one life and it’s difficult to let your body in anyone else’s hands.”

Fortunately for Vincent, he was in the very capable hands of Dr. Paiboon and his experienced orthopedic team. “The surgery was efficient, quick; very quick and very good,” explained Vincent. “And now I can say I made the best choice I could. I don’t think it would have been any better if I had gone back to my country for the operation.”

Once the surgery was successful, Vincent was able to start his rehabilitation. “After the surgery, I have been with a team of nurses here, and they have been great, professional and nice,” Vincent told us. “Even though it was my bad luck initially, with my accident, I had a chance to arrive in this hospital and receive surgery in a very good condition. The team has been very, very helpful to me. They answered every question, every time. And finally the nurses’ team made my stay here as comfortable as possible. So today I can thank the entire team: Dr. Paiboon, the nurses. Thank you to them and the hospital. Khob khun krub.”

Dr. Paiboon summed up the case, and how pleased he was with the results. “The patient was extremely lucky because he received outstanding care after surgery, meaning he experienced no complications whatsoever. He was able to stand and within 1-2 days walk again, which was fantastic.”

Dr, Paiboon advices anyone suffering a similar back injury. “Generally, if patients experience an accident or injury involving their spine, the first thing to remember is not to panic. Do not try to move around, instead stay calm and as still as possible while waiting for assistance to arrive, such as a transfer to hospital, which must be carried out by highly experienced medical staff. Under no circumstances should the patient try to stand or walk as it could worsen the condition. For instance, a minor injury could turn into one that renders them unable to walk or leaves them with a permanent disability. It is recommended that you try to contact the nearest hospital or transfer the patient to a specialized orthopedic center.”