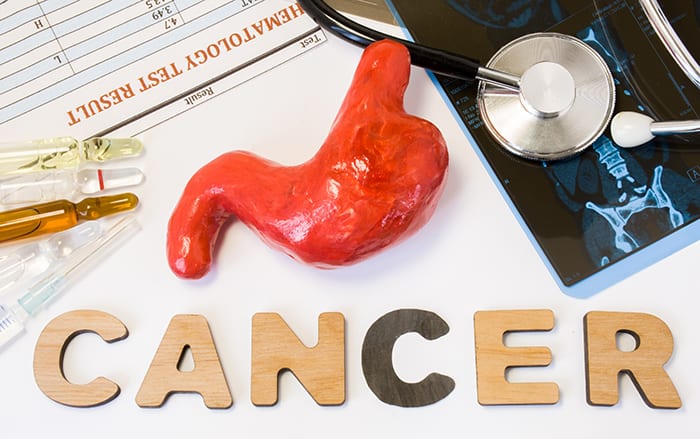 Stomach cancer occurs as a result of irregular and uncontrolled stomach tissue cell growth, which eventually spreads to other nearby organs. Stomach cancer can affect any area of the stomach, although successful treatment is possible should the cancer develop in certain locations.

Causes and risk factors associated with the onset of stomach cancer

The causes of stomach cancer are generally associated with a diet high in carcinogens, such as those found in processed food products and char-grilled food, but the following factors can also place anyone at a greater risk of developing the disease:

Stomach cancer is extremely dangerous due to its lack of symptoms during the initial stages of the disease. This means that by the time someone finds out they have stomach cancer, it has often deteriorated to the point that it has spread to other nearby organs. For this reason, people should be on the lookout for the following symptoms: regularly suffering from gas, bloating or indigestion, as well as nausea, vomiting, loss of appetite and burning sensation in the chest after eating.

If these symptoms are ignored, the disease may take a tighter grip. Seek urgent medical advice should any of the following symptoms arise:

Treatment for stomach cancer differs depending on the cancer’s stage, although the following forms of treatment are the most common:

Stomach cancer can currently be treated with both open surgery or laparoscopic surgery, which today is the preferred method of treatment for early stage cancer or cases where the cancer is still minimal. Laparoscopic surgery also enables patients to make a fast recovery due to the minimal scarring left. Overall treatment times in hospital are reduced, although such a procedure must be carried out by highly skilled surgeons with experience in performing laparoscopic surgery.

Doctors may also consider chemotherapy alongside surgical treatment for stomach cancer as this can reduce the likelihood of cancer recurrence as well as reduce the risk of the cancer spreading to other organs. However, chemotherapy carries with it the risk of numerous side effects, including nausea, vomiting and exhaustion, meaning patients undergoing such treatment should get enough rest, eat foods that are easily digestible, drink plenty of water and try to keep a positive frame of mind, avoiding stressful or anxiety inducing situations. Crucially, any treatment should be closely monitored, meaning patients must keep all their doctor’s appointments.

Stomach Cancer: A Deadly Disease Often Overlooked Stomach cancer occurs as a result of irregular and uncontrolled stomach tissue cell growth, which eventually spreads to other nearby organs. Stomach cancer can affect any area of the stomach, although successful treatment is possible should the cancer develop in certain locations.
User rating: 2 out of 5 with 1 ratings