The Health Hazards of Sitting Too Long A little-read piece of news in November 2015 reported the death of a 40-year old New Zealand National Rugby Team and All Blacks player who was in good health. He died after returning to New Zealand on a plane from England. The team doctor reported that the cause of death was a blood clot (deep vein thrombosis) blocking a blood vessel of the lungs (pulmonary embolism), partially caused by sitting for many hours on a long distance flight.

Many of you have likely read or heard about a disease known as “economy class syndrome”. In reality, this is a risk for all classes of airline travel if you remain seated and immobile for long periods of time and do not drink enough water. In 2007, the World Health Organization (WHO) studied and reported that this syndrome is caused by a lack of physical activity for long periods of time. This can occur while traveling either by plane, train or car, and that it is not related to air pressure or height.

In this article, we will discuss the various disadvantages of sitting for long periods of time – or to put it more broadly: the disadvantages of prolonged inactivity and lack of movement. There are a number of published studies that address the negative health effects of inactivity.

What happens to your body when you sit for too long?

It can cause damage to various organs in your body as follows:

When you sit for long periods of time, your blood flows more slowly and your muscles burn less fat, which makes it easier for fatty acids to clog your heart. Research published in the Journal of the American College of Cardiology showed that women who sit for 10 or more hours a day may have a significantly greater risk of developing heart disease than those who sit for five hours or less.

Your body’s ability to respond to insulin will be affected after just one day of excess sitting, which leads your pancreas to produce increased amounts and may lead to diabetes. Research published in Diabetologia found that those who sat for the longest periods of time were twice as likely to have diabetes or heart disease, compared to those who sat for less than six hours. Sitting for more than eight hours a day has also been associated with a 90% increased risk of type 2 diabetes.

Excess sitting may increase your risk of colon, breast and endometrial cancers. The mechanism isn’t known for certain, but it could be due to excess insulin production, which encourages cell growth. It could also be caused by the fact that regular movement boosts antioxidants in your body that may eliminate potentially cancer-causing free radicals.

Findings presented at the 2015 Inaugural Active Working Summit also found that sitting increases the chance of various types of cancer as follows:

Sitting down after you’ve eaten causes your abdominal contents to compress, slowing down digestion. This, in turn, can lead to cramping, bloating, heartburn and constipation, as well as to conditions caused by microbial imbalances in your body, which are associated with the pathogenesis of both large and small intestine disorders. Intestinal disorders include inflammatory bowel disease, irritable bowel syndrome (IBS), etc.

Your brain function slows when your body is sedentary for too long. Your brain will get less fresh blood and oxygen, which are needed to trigger the release of brain- and mood-enhancing chemicals.

It’s common to hold your neck and head forward while working at a computer, answering the phone or holding a phone to your ear. These positions over a long period of time can lead to strains of your cervical vertebrae along with permanent imbalances, which can lead to neck strain, sore shoulders and back pain.

Sitting puts more pressure on your spinal discs than standing, and the toll on your back health is even worse if you’re sitting hunched in front of a computer. About 40% of people with back pain spend long hours working at a computer each day. The discs in your back will be in much better condition if you move around frequently, as this will allow them to contract and expand as you move and thus absorb blood and nutrients. When you sit for long periods of time, the disks are compressed and can lose flexibility over time. Sitting for excessive periods of time may also increase your risk of herniated disks.

Sitting for prolonged periods can cause your hip muscles to become tight and limited in range of motion because they are rarely extended. In the elderly, this decreased hip mobility and tightening of hip muscles are leading causes of falls. Sitting for too long also does nothing for your gluteal and hip muscles, causing them to become weakened, thus affecting your stability and the power of your stride when walking, running or jumping.

Sitting leads to poor circulation in your legs, which can cause swelling in your ankles, varicose veins and blood clots known as deep vein thrombosis (DVT).

Walking, running and engaging in other activities lead to stronger, denser bones. A lack of these types of activities may cause bones to lack the stimulation needed for healing and repairing and can even cause osteoporosis.

Too much sitting can shorten your life

Many studies show that spending too much time sitting each day can actually shorten your lifespan. One study showed that reducing your average sitting time to less than three hours per day can increase your life expectancy by up to two years. A study published in the British Journal of Sports Medicine summarized that for every hour of television viewed by a person over the age of 25, their life expectancy is reduced by approximately 22 minutes. This is troubling when you compare it with the fact that every cigarette smoked reduces life expectancy by about 11 minutes. Researchers found that adults who spent an average of six hours per day sitting in front of a television screen shorten their life expectancy by almost five years compared to those who didn’t waste time watching television.

Based on the above information… Will you choose some after-meal walks, physical activity and exercise?

Or will you choose instead to sit back and watch a TV series after you eat or before bed?

The Health Hazards of Sitting Too Long Sitting for long periods increases the risk of colon cancer, lung cancer and endometrial cancer.
User rating: 4 out of 5 with 1 ratings

The Degree of Doctor of Medicine (with license from Thai Medical Council), Faculty of Medicine, Siri 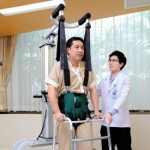