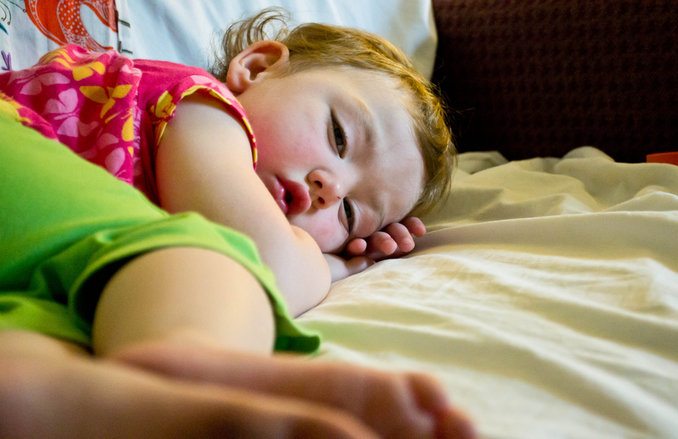 Obstructive sleep apnea (OSA) is fairly common in children when there is a partial or complete blockage of the airway during sleep. The result is a disruption to the respiratory system and interruption of the child’s sleep. OSA is found in children at all ages, especially 2-6 years. Approximately 2% of the population is found to suffer from OSA with a fairly equal male/female ratio.

Unlike in adults, OSA in children can be caused by a wider range of factors, most common cause is a blockage of the upper respiratory airway caused by an enlargement of the tonsils located at the base of the tongue and the adenoids situated posterior to the nasal cavity. This occurs when the neck muscles are relaxed during sleep. OSA can also be caused by a buildup of fat around the neck in overweight children or by abnormal physical characteristics such as unusual facial features, chin, and neck causing a narrowing of the upper respiratory system. Malfunctions of muscles and nervous system, genetics and hormones are other possible causes of OSA.

Children who have OSA usually snore heavily and find it very difficult to breathe when they are sleeping the pattern of breathing during sleep is abnormal. However, these symptoms do not occur when the children are awake.

Considered as the most efficient and effective method for diagnosing OSA, Polysomnography (Sleep Study) monitors the patient’s sleeping throughout the night. With this method, the children are required to stay in the hospital overnight with parents and technician/nurses observing their breathing. During 6–8 hours of sleeping, the Polysomnography records every signal through electrodes placed on the body.  This method is completely pain-free and the results indicate whether or not the child has a blockage in the respiratory system and can also be used to assess the severity of OSA.

Breathing stops while sleeping leads to a decrease of oxygen in the bloodstream. Failure to cope with this condition in its early stages will impact the function of the brain, memorization, and concentration. The development of the brain and performance at school suffer as a result.  In serious cases, OSA can result in the overworking of the heart and even heart failure which can be fatal.

Obstructive Sleep Apnea If your child is snoring and having trouble sleeping through the night, understand the condition and discover how you can help.
User rating: 3.13 out of 5 with 23 ratings