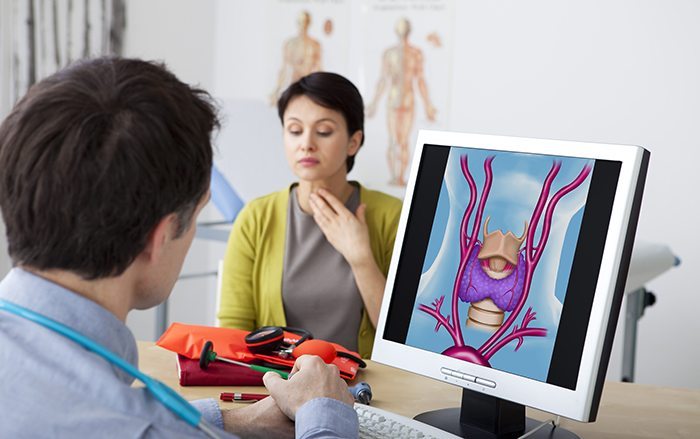 Thyroid problems are prevalent in young women. However, surgery causes scars on the neck that is understandably disturbing. That problem has now been solved by a new surgical technique providing thyroid surgery that doesn’t leave a scar. This procedure is done through the patient’s mouth and our Thai surgeons have already become internationally recognized for this skill.

What is the thyroid gland?

The thyroid is a butterfly-shaped gland that sits low on the front of the neck, lies below the Adam’s apple and close to trachea and has two side lobes. The thyroid produces hormones that influence metabolism, body temperature, growth and development.

Thyroid abnormalities can be caused by iodine deficiency or thyroid hormone malfunction such as excessive thyroid hormone production or hyperthyroidism, as well as low hormone -producing hypothyroidism. This condition can be treated with medicines, radioactive iodine or surgery. Other abnormalities to the thyroid can be caused by anatomy, including a mass or lump. There may be a tumor that is non-cancerous or could become cancerous in the future, or the entire thyroid gland itself can become enlarged without a lump.

How are thyroid abnormalities treated?

Thyroid treatments depend on the indications and conditions of each patient. Hyperthyroidism treatments often begin with medicines and radioactive iodine. In most cases, the enlarged thyroid gland is removed by surgery, if the medications do not make it shrink, because if left untreated for too long, the thyroid may become cancerous (although the chances of this are slim). In some cases, surgery is performed for aesthetic reasons; however, the treatment and surgical technique chosen for each patient depends on the physician’s diagnosis.

Traditionally, thyroid problems are treated with open surgery where a horizontal incision is made across the neck. In some cases, all of the thyroid gland and lymph nodes are removed in this way. Patients are left with a visible horizontal scar on the neck after this surgery. In the past 10 years, a new minimally invasive technique was developed. The surgery is performed through a small cut that can be made in the armpit or nipple so as to avoid leaving any visible scar on the neck. The more common technique is through a tiny cut in the armpit; however, there are limitations. The distance between the armpit and thyroid gland is long, making the surgery difficult, and if both sections of the thyroid gland need removal, then incisions must be made in both armpits. This surgical technique is still not an appealing option for everyone because some women do not want to have an incision in their armpit, as it is visible when wearing sleeveless garments.

In the past few years, surgical technique has further developed by performing the surgery through incisions made inside the mouth, underneath the lower lip, thereby avoiding a postoperative scar on the skin. This technique requires the expertise of a highly-skilled surgeon. Now, a team of surgeons at the Police General Hospital in Bangkok have successfully completed the Transoral Endoscopic Thyroidectomy (TOETVA) for the first time in Thailand. The technique has been improved and there are very few complications. The outcomes after TOETVA are similar to those of the standard procedures. This surgical technique has been widely recognized and performed globally.

To perform the TET surgical technique, the mass should not be larger than six centimeters and the thyroid must still be functioning normally. Surgery becomes more difficult with a larger mass size and it lowers the chances for success. If the thyroid is malfunctioning, the doctor will then prescribe the proper treatment.

What to do before and after the surgery

Before surgery, patients can eat and drink normally. However, patients should stop taking fish oil, because it can cause excessive bleeding and also try to avoid catching a cold because anesthesia cannot then be administered to a patient with a cold. During the first 24 hours after the surgery, patients can sip water and have soft foods the next day. Patients should stay in the hospital for three to four days for observation and can return home if no complications are present. It is recommended that the patient avoid coughing or removing phlegm in the throat during recovery in order to reduce bleeding risks. After that, patients can resume their normal activities.

“ The scar-free thyroid surgery technique through the mouth has dramatically improved the quality of life and increased the confidence of patients with thyroid conditions. People are now becoming more health conscious and if the detected mass is not too large, it can be removed more safely and easily with no visible scar using this technique.”

A New Option...Scar-free Thyroid Surgery Thyroid problems are prevalent in young women. However, surgery causes scars on the neck that is understandably disturbing. That problem has now been solved by a new surgical technique providing thyroid surgery that doesn’t leave a scar.
User rating: 3.85 out of 5 with 13 ratings