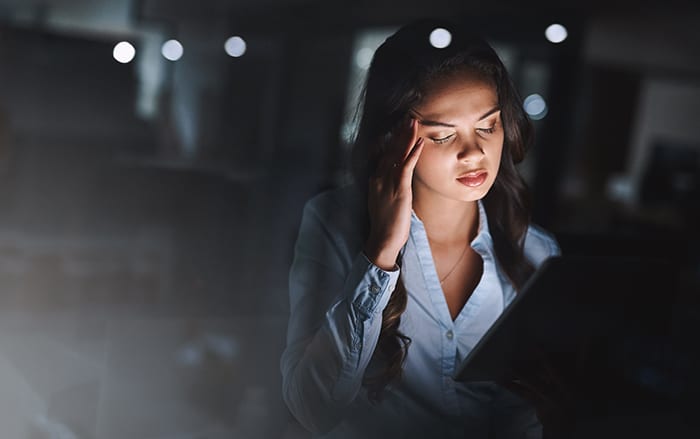 The term migraine refers to severe headaches which tend to affect one side of the patient’s head, usually affecting the same side each time they occur and often causing nausea alongside vomiting, as well as an increased sensitivity to light and sound. Migraines can last for hours at a time. Sometimes they may be so severe as to have a significant impact on the daily life of the sufferer.

Without treatment, migraines could increase in severity and frequency at the same time as becoming more resistant to treatment, despite a range of medicated substances being prescribed.

Migraines occur due to abnormalities affecting the nervous system located in the cortical layer of the brain. The resulting irregularities in terms of chemical production affect the blood vessels, causing them to swell and expand, thereby resulting in a severe headache.

However, while migraines are categorized as a form of idiopathic brain condition, the following are some factors thought to stimulate their onset:

What type of headache should require a visit to the doctor?

Migraines can last anywhere between 4-72 hours and the frequency with which they occur differ from person to person. Nevertheless, if the severity of the migraine reaches a level whereby it begins to affect your daily life, or you suffer from any of the following symptoms, you should seek immediate medical attention:

Treatments for migraines can be categorized as those abortive and preventive treatment.

Migraines are severe headaches that may be chronic or come and go. In either case, patients should do their best to avoid potential stimulating factors that may lead to their onset. Additionally, migraine sufferers should try to protect themselves by getting plenty of sleep, exercising regularly, and reducing their stress levels.

When you start to feel a migraine coming on, attempt to place yourself in a dark, quiet room, close your eyes and try to rest or sleep. In addition, placing a cold compress on the nape of your neck while gently massaging the painful area could also go some way to helping reduce the aching.

However, if you experience a sudden and painful headache alongside other symptoms, such as nausea, vomiting, blurred vision, speech difficulties and numbness down one side of the body, it is recommended that you seek medical attention in order to undergo a thorough diagnosis of your condition.

Migraines The term migraine refers to severe headaches which tend to affect one side of the patient’s head, usually affecting the same side each time they occur and often causing nausea alongside vomiting, as well as an increased sensitivity to light and sound.
User rating: 0 out of 5 with 0 ratings