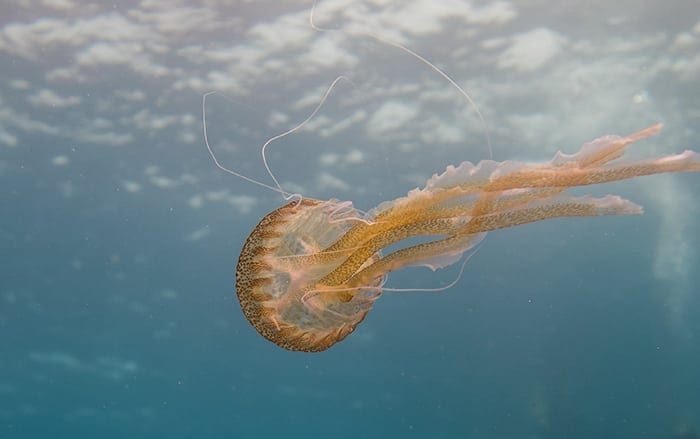 As it is now the rainy season, there has been an upturn in the amount of people seeking medical attention after being stung by a jellyfish while bathing in the sea. Most of the sting victims have a red wound the shape of which resembles the tentacles of the jellyfish that stung them. In severe sting cases, the victim may be left with burns or blisters on their skin. However, if the victim has been affected by the poison from jellyfish, which has separated from the jellyfish itself, then the skin may be left with itchy bumps, similar to those left by mosquito bites, on their body, arms or legs. Today, our resident doctor will explain more about jellyfish and their stings.

Jellyfish are transparent, invertebrate marine creatures. Their tops are similar to umbrellas in shape, underneath which there are organs that are responsible for eating and digestion.

There are various species of jellyfish, some of which are edible. The Aurelia jellyfish and Chrysaora jellyfish are both types of poisonous jellyfish. These contain the substance Nematocyst all over their bodies, most of which is concentrated in their tentacles or around their mouths. This poison’s function is to kill their prey.

The jellyfish we see most often are the clear colored ones that have run aground on beaches. Sometimes we may even see these jellyfish in the noodle soup dishes we eat for our dinner. However, Chrysaora jellyfish are different from the usual jellyfish we encounter in that they can be rather colourful and have longer tentacles than other, more commonly found types. These jellyfish feed on plankton, fish, shrimp and shellfish.

The jellyfish’s liquid poison is located in small needles which are used to kill their prey. When we brush against these needles or their tentacles we will feel a burning, aching sensation immediately, even when we are still in the water. The poison can also cause a rash, inflammation or a burn-like scar. Some people may incur symptoms such as a tightness in the chest, difficulty breathing, feelings of anxiety, insomnia, exhaustion and fever. Furthermore, some types of Chrysaora jellyfish (such as the box jellyfish, found mostly in Australia), are so dangerous that their stings can be fatal. The stings of this type of jellyfish typically cause burn-like wounds and chronic scarring which can lead to permanent scarring.

The monsoon season is when jellyfish are at their most abundant, which means people should avoid bathing in the sea throughout the whole season. If you are stung by a jellyfish, you should immediately leave the water as serious jellyfish stings can cause people to drown. Although dead jellyfish may be found along beaches, they should not be touched or played with as they may still contain harmful poisons. If stung by a jellyfish, and the tentacles are still stuck to the body, the victim should try and remove them as soon as possible. This should be carried out using a thick cloth, a stick or by gently rubbing them off with dry sand or talcum powder. Avoid using force when removing the tentacles or needles as this may cause them to disperse even more poison. For this same reason, bare hands should not be used for the task. After safely removing the needles, the area should be gently cleaned with sea water, alcohol, ammonia or lotion. Avoid using fresh water as this can aggravate the needles or tentacles and diffuse even more poison. It is possible to scrape the poison away using a thin, sharp object which may be close by, such as a credit card. Clean, white sand can also be used to gently dab the area as this assists in reducing the amount of poison still in contact with the skin.

Villagers who live by the sea often treat jellyfish stings with the ocean morning glory plant or this plant mixed with vinegar of 5% concentration. The plant mixture is covered with a cloth and massaged onto the affected area; it is then left for 30 – 60 minutes in order to damage the proteins present in the poison. In the event that the victim of a jellyfish sting suffers an allergic reaction and has a fever and nausea, or if they display other symptoms of an allergic reaction such as an aching, painful and burning feeling around the sting wound, it is recommended that they are taken to a hospital as soon as possible as they may be at risk of losing consciousness. A victim of an allergic reaction is likely to be left with a permanent scar like that of a burn.

As you are now aware of the dangers of jellyfish, medical professionals would like to warn those people who enjoy traveling to the seaside that bathing in the sea can be hazardous from the beginning of the monsoon season until the start of the cold season. This is due to the monsoon season coinciding with the jellyfish breeding season. Jellyfish can get caught in waves and swept to shore which means that there are numerous on or around the shoreline. Nature is quite amazing in this sense as the areas with the most jellyfish also tend to have plenty of the ocean morning glory plant growing too.

Please be extra vigilant of the dangers when bathing in the sea immediately after rainfall. Many seaside resorts will have signs warning beach goers of the dangers present such as riptides, strong currents or poisonous sea creatures. If, by chance, you are stung by a jellyfish, do not forget to administer first aid before the sting has a chance to develop into more serious and difficult to treat symptoms. 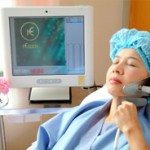