Have You Ever Heard of Herpangina? 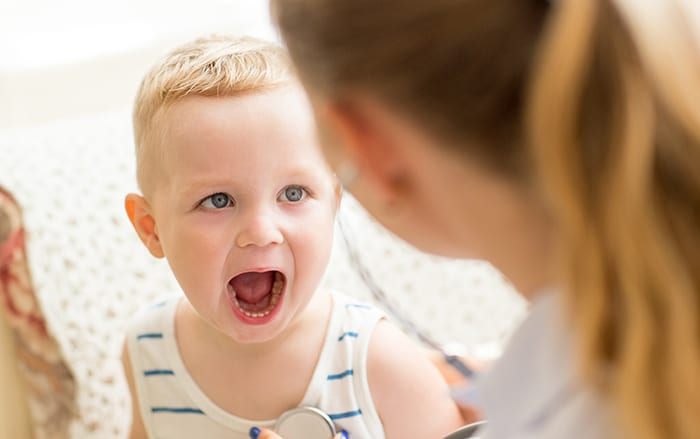 Herpangina is a disease that can affect anyone of any age, although it is most common in children under the age of 5 years old as the virus is easily spread throughout locations used to house numerous children at one time, such as school and nurseries. The symptoms of this condition include small ulcers in the child’s throat, a fever and exhaustion, while the disease may also cause the children to lose his or her appetite, refuse meals and vomit. Younger children will tend to become quite depressed and fussy, whereas older children might suffer from a sore throat, headaches and neck pain. That being said, the disease’s symptoms are not serious, and the condition usually goes away by itself after a period of around 7-10 days. This disease is also most prevalent during the monsoon or dry seasons.
Herpangina occurs as a result of a viral infection belonging to the enterovirus group, meaning that its main symptoms affect the digestive system. This group of viruses consist of many separate strains, and once someone has been infected with one strain, their body will develop an immunity that means they will be immune to that strain thereafter. However, they will still be at risk of contracting a different strain of the same virus.

This type of disease can be spread through contact with snot, saliva, phlegm and fecal matter, and it can also be spread through contaminated water, foods, containers, hands, toys, tables, chairs and various other objects that can potentially come into contact with the mouth. These groups of viruses also have an extremely high potential of disease contraction, with a mere 10-100 particles being enough to result in an infection.

Symptoms of the disease differ from child to child but an acute fever, which may be as high as 40 degrees Celsius, is common. In some cases, the high fever can lead to seizures and difficulty swallowing, which causes the child to refuse food, lose their appetite, drool at the mouth and vomit, while some causes of dehydration may also occur, such as a dry mouth and lips, sunken eyes, a lack of tears when crying, highly concentrated urine, infrequent urination, and numerous small ulcers that form around the soft palate, tonsils and back of the throat. These ulcers usually come up within the first 2 days of infection, and are around 2-4mm in diameter, being white or light gray in color, with a red edge. For the most part, these ulcers go away within the first 7 days.

Doctors will perform a diagnosis based on the characteristics of the mouth ulcers because herpangina usually results in ulcers that differ from other viral infections. Moreover, doctors will also carry out a detailed analysis of the patient’s medical history.

There are currently no antiviral drugs capable of treating herpangina. However, the condition is not serious, and will usually go away by itself in 7-10 days if the symptoms are cared for in the following ways:

However, if parents or guardians notice any of the following symptoms, the child should be taken to see a doctor at the earliest opportunity in order to receive medical treatment: a high fever that does not go down despite taking fever regulating drugs; refusal to consume any water, milk, food, or only taking a little when doing so; symptoms of dehydration, such as urinating infrequently and any urine passed being highly concentrated; a dry mouth; sunken eyes; and looking noticeably distressed or restless.

How can this disease be prevented?

Due to there being no vaccinations available for this condition, parents must take great care in terms of their child’s hygiene, being sure to always wash the child’s hands, especially before and after meals, as well as when preparing meals themselves. Additionally, use tissues or handkerchiefs to cover their mouth when sneezing and coughing – or ask them to use an arm to provide cover where tissues or handkerchiefs are unavailable – ensuring that any used tissues are thrown away immediately after use, and that hands are washed after every visit to the bathroom. Parents and caregivers of infants suffering from this condition must also wash their hands before and after changing diapers and underwear or after wiping the child’s nose, saliva, phlegm or feces. Furthermore, it is essential to maintain cleanliness of floors, tables, chairs, toys and other objects that the child regularly comes into contact with. These should be frequently cleaned using antibacterial products. Finally, if your child is suffering from herpangina, he or she should be kept off school for a period of one week to ensure the disease is contained.

Have You Ever Heard of Herpangina? Herpangina is a condition that results from a viral infection which most commonly affects children under the age of 5.
User rating: 5 out of 5 with 1 ratings