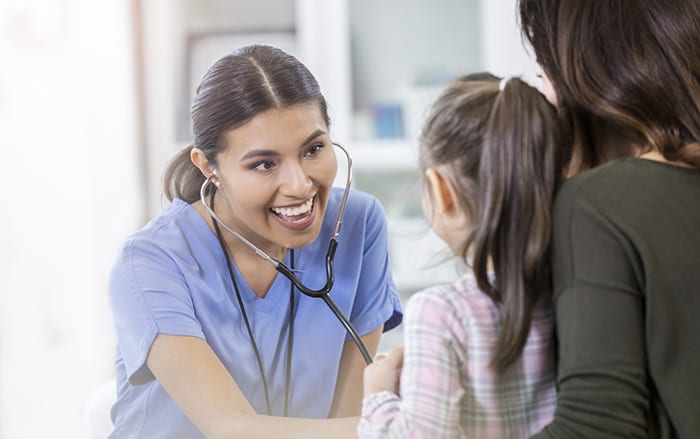 Having a child can make a family feel complete, but children can also be a source of anxiety for parents, especially for new parents who may worry about issues surrounding their child’s health, nutrition, development and growth. These concerns are highly individual, meaning a child may not match up to certain age-related standards. Parents are sure to have many questions for their doctor whenever they attend a health check-up.

The 10 most common questions posed to doctors

1. How much milk should my child be drinking?

Doctors have the following advice for new mothers who are required to supply adequate amounts of breastmilk for their little one:

2. Why is my child not waking up to feed during the night?

This is one of the biggest worries for mothers, although the issue does not tend to present itself until after 3–4 months of age. There is no need to worry should this problem arise as it is merely a reflection of the child’s brain developing to the stage where they can control their sleep patterns better and sleep for longer periods at a time. Children often begin sleeping for 7–8 hours at a time without waking up to feed. Children who do wake up in the middle of the night usually do so as a result of their attachment to the mother rather than out of hunger. In such cases, mothers should gently rock and comfort their child back to sleep because if they make a habit out of feeding the infant at these times, it could lead to future issues with them associating waking up with being fed.

3. What should I do if my child suffers from indigestion, constipation or diarrhea?

Indigestion in young infants can be caused by a number of issues, such as a food allergy, drinking too much milk, or even crying too much. Should the root cause of their indigestion be related to milk consumption, mothers should burp their child. This will help ease the discomfort which arises due to the high levels of lactose contained in breastmilk. Constipation, on the other hand, can be diagnosed by observing the child’s feces. Feces of children under 6 months resembling rabbit excrement – despite these stools being passed on a daily basis – is considered abnormal and parents should take their child to seek medical attention. Such an issue, if left untreated, may eventually result in a chronic health condition. Regarding diarrhea, children who frequently produce liquid feces or particularly pungent stools more than 3 times per day should also be taken to receive urgent medical attention as they could be at risk of dehydration or a vitamin deficiency.

4. Why does my child suck his/her fingers?

It is completely normal for young infants aged 4–5 months to suck their fingers, as this is the age at which they begin to explore their surroundings. Parents should therefore be careful not to prohibit or pull their fingers away because they may turn to sucking their toys instead.

For older children, the sucking may be a result of familiarity or used as a way to self-comfort. Should parents find that their grown-up child is still sucking on their fingers, it is important not to be too strict or pull their fingers away from the mouth because this could shock the child. Instead, try to find toys or activities that will provide a distraction for the sucking, as well as providing a platform for the development of their fine motor skills.

5. Is my child’s heavy breathing while sleeping dangerous?

Breathing heavily while asleep could be caused by a number of factors such as the common cold or allergic rhinitis, although tonsillitis, adenoid hypertrophy, and other sleep-related issues could also play a part. Parents are therefore encouraged to bring their child to a doctor so that an accurate diagnosis and subsequent treatment can be provided as necessary. Do not neglect the issue because it could lead to problems associated with their emotional stability and brain development, including their learning ability and concentration span. This is because not getting enough quality sleep can eventually lead to breathing problems that may result in them not getting enough oxygen throughout the night.

Allergies are not infectious, nor are they a result of bacterial infections, although they can be passed from parent to child genetically. For instance, the child of a father or mother with an allergy is more likely to suffer from allergies than those whose parents do not have such conditions. It is important for parents with allergies to bring their child in for an allergy test at the earliest opportunity. There are also a number of techniques that can be used to reduce your child’s risk of developing an allergy, including ensuring they are fed on breastmilk for at least 4–6 months and avoiding cow’s milk as a nutritional supplement between the ages of 6 months to a year. The latter technique is important because the likelihood of a childhood cow milk allergy disappearing during the first year of life is 50%, and increases to 80–90% from the age of 3 years upwards.

7. Why is my child not eating much or losing his or her appetite?

To not feeling hungry, a low appetite may reflect a child’s attitude towards food resulting from the anxiety that some adults feel towards their child’s development. This can lead to the child lacking interest in consuming a healthy diet. Therefore, parents must be strict when it comes to not keeping unhealthy snacks or treats in the home, and stay strong in the face of their child’s displeasure until the point that the child is hungry enough to eat something healthy. Parents should ensure that they have nutritional, tasty foods around the home in suitable amounts, and encourage their child to eat their whole meal or until they feel full. Each meal should last no more than 30 minutes, although parents must exercise restraint and ensure they are neither too strict nor too forceful when reinforcing these positive behaviors.

8. Why doesn’t my child speak?

This is a common problem, whether it is related to infants who don’t speak at all, infants who develop speaking skills slowly, or children who speak their own special language.

Parents can assist their child in developing their language and communication skills by reading them books and fairy tales, or by speaking with them regularly. In addition to language development, such techniques can also develop familial bonds.

9. Why is my child so hot-tempered?

Between the ages of 1–3 is when children find it difficult to control their emotions, and when they can also have difficulty in communicating or expressing themselves adequately. This can lead to displays of unwanted emotion such as crying or hurting themselves, especially when they do not get their own way. Unfortunately, parents often look to solve these problems by giving into their child’s demands but this only reinforces these negative behaviors as children view them as an effective and necessary step to getting what they want. The best way to deal with children’s unwanted behavior is by refusing to give in, attempting instead to better understand them and identify what is at the root of their unhappiness, before gradually training the child to communicate their desires in an appropriate manner. For example, if a child is screaming and shouting, parents should stand waiting at a distance, only entering into conversation with them once their cries have died down, as this will help to teach them how to better manage and control their own emotions.

For children who attempt to cause damage to themselves, others, or their food when angry, parents should try to hug their child until they calm down. It may be necessary to grab them gently when they’re facing the other way to prevent them from turning their violence against the parents. It is natural for children to writhe around and push parents away while doing this, so parents must be ready to hug them tightly and be patient while the child’s temper subsides. If parents behave in this manner consistently each time the child loses his or her temper, the child will eventually learn that these unwanted behaviors are not the way to get what they want. The result will be a reduction of such behavior before cutting it out completely.

It is important that parents do not lose their own temper, or try to teach a child who is still angry, as this could further inflame the situation. Instead, they should wait until the child has calmed down sufficiently to listen to what is being said while not having given in to the demands. This will help children understand that losing their temper will result in adults becoming more strict in not meeting their demands. However, if parents react by losing their temper, hitting the child or shouting at them, that child will eventually begin to copy and replicate these behaviors. It is vital that parents remain calm, approachable and patient until the child grows up and shows an attitude improvement.

10. Why does my child hit other children?

The issue of children hitting others may be a result of children not yet being able to properly express their own desires. What’s shocking is that these children are often replicating adults’ actions, including those they’ve seen on TV or in unsuitable video games. If parents discover that their child is hitting others, they must first halt any form of violence at home, including hitting the child or punishing them severely. If parents witness their child looking like they are about to hit another child, they should quickly grab them by both arms and look them in the face while sternly saying “stop” or “do not hit people.” It is important to teach them gradually not to steal others’ possessions by encouraging them to share objects and consistently informing them that it is unacceptable to ever use violence.

Should there be a delay in parents hearing about their child hitting someone, it is vital that parents deal with the situation as soon as possible by sternly telling the child to “stop hitting people” after they have taken them away from the situation and helped to calm them down. Crucially, parents must avoid punishing their child too severely or through the use of violence as this could lead to children seeing violence as an acceptable response to various situations.

Diploma of Thai Board of Pediatrics