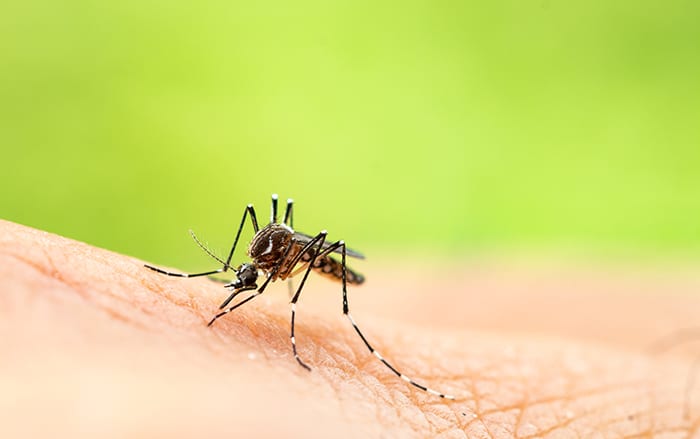 In addition to carrying dengue fever, mosquitoes are also capable of spreading chikungunya disease. Both diseases are equally dangerous, especially when contracted by children with the distinct possibility of complications and symptoms affecting vital organs, such as the liver, kidneys and heart.

Chikungunya disease is caused by the chikungunya virus, which belongs to the Togaviridae family of viruses. Both the Aedes albopictus and Aedes aegypti species of mosquito can be carriers of this virus while cases are common in both urbanized and rural areas. The disease usually spreads during the monsoon season or in areas containing stagnant water, with the mosquitoes that carry the disease often venturing out to feed during the daytime, meaning that children who enjoy playing outside the home or in school playgrounds are most at risk of contracting the disease. Moreover, pregnant women who have contracted chikungunya are at risk of passing the disease onto their unborn child.

Due to dengue fever and chikungunya disease both being spread by mosquitoes, and because the symptoms of each condition being similar to one another, it is common to find cases of patients suffering from both disorders at the same time. However, chikungunya disease is nowhere near as dangerous as dengue fever. Patients who have contracted chikungunya will experience a fever much more acutely than dengue patients, but this fever generally goes away after just two days, whereas the fever associated with dengue fever tends to last about four days. Generally, chikungunya patients do not go into shock due to the disease not resulting in plasma hemorrhaging from blood vessels, although it is common to see a red rash and red eyes as well as joint and muscle pain that is worse than those associated with dengue fever.

The incubation period for chikungunya disease is 3–7 days after the mosquito bites. When this period comes to an end, the following symptoms are likely to occur:

Doctors will begin by making inquiries about the patient’s medical history and symptoms before taking a blood sample to be analyzed in a laboratory to confirm the disease. Such a course of action is currently the most effective method available, with results typically returned within 1–2 days or 1–2 weeks at the longest.

There are still no drugs or vaccinations available that specifically target chikungunya disease. Hence, treatment is usually focused on treating its symptoms, meaning that doctors often prescribe fever drugs and pain relief medication. Patients are urged to act according to the following advice when recovering from the disease:

The most important aspect in the prevention of chikungunya disease is to avoid being bitten by mosquitoes, which can be achieved by:

Although chikungunya disease is not fatal and is also less severe when compared to dengue fever, it is still a condition that is capable of being detrimental to our bodies. This is especially the case in those with low immunity, such as infants and the elderly, with these groups being at risk of developing complications that are difficult to treat. Hence, taking good care of your health by eating a healthy diet, getting plenty of rest and exercising regularly are crucial, as is consulting a doctor regarding a thorough diagnosis and effective treatment should you experience a high fever, loss of appetite, dehydration, etc.

Chikungunya, Another Dangerous Disease Spread by Mosquitoes Chikungunya disease is spread by mosquitoes and has symptoms similar to dengue fever. Sufferers usually experience an acute fever alongside joint and muscle pain as well as a red rash on the arms and legs, red eyes, headaches, exhaustion, vomiting and diarrhea.
User rating: 5 out of 5 with 1 ratings