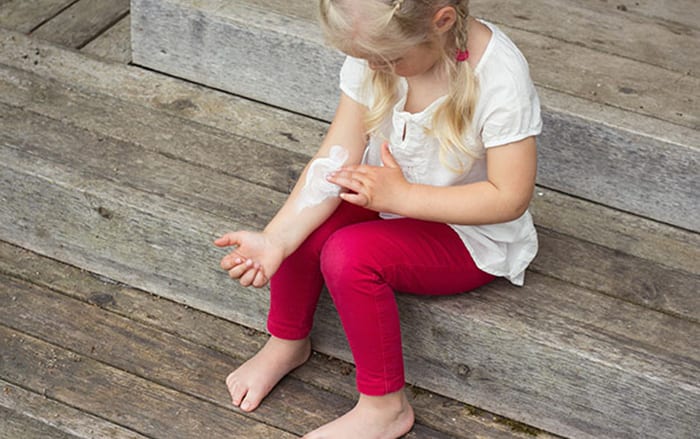 Atopic dermatitis is a condition that affects 10-20% of children worldwide. Symptoms include dry, red and itchy rashes that flares up and go for an extended period of time. Infants begin to display symptoms from the age of 2-3 months, while up to 60% of sufferers will experience symptoms during the first year of their lives.

What are the main causes of the condition?

The root causes of this condition remain unclear but numerous associated risk factors have been identified as follows:

2. Structural skin defects: These include, for instance, losing greater-than-normal amounts of water through the skin, a reduction in skin lipids, abnormal skin acidity and alkalinity, an imbalance in the skin’s microorganisms and abnormality of the skin’s immune system.

3. Environmental factors acting as stimulants: These include:

What are the symptoms of atopic dermatitis?

Symptoms of atopic dermatitis include dry, red and itchy rashes, which come and go for an extended period of time. In some cases, the rashes may have crusted on top rash or the skin may become thickened due to repeated scratching.

The location of the rashes differ depending on the age of the child, for example:

Pediatric doctors will analyze the patient’s symptoms and family history of allergies as the main form of diagnosis. Laboratory testing are usually unnecessary, unless the patient has not responded well to treatment. In these cases, the doctor will consider additional information and form a diagnosis based on potential food allergies or exposure to certain chemicals associated with the rashes flaring up.

1.Basic skin care should regularly be carried out to help reduce rash occurrences.

2.Treatment for the flaring

There is currently method of treatment available to prevent or reduce rashes occurring.  This method is referred to as ‘proactive treatment’. It is carried out through the use of anti-inflammatory medication applied to areas of skin most prone to rashes, such as the inner sections of the knees and elbows. These creams are applied 2-3 days per week, during the periods of time when the rashes are dormant.

There is currently no treatment available to effectively prevent against atopic dermatitis but it is believed that applying creams and lotions during early infancy will reduce occurrences of atopic dermatitis.

Atopic dermatitis is characterized by skin rashes which come and go, alternating between flaring up and lying dormant. Additionally, occurrences of atopic dermatitis tend to go away as patients grow up, with 80% of sufferers leaving their symptoms behind by the time they reach adolescence.

Infants who suffer from atopic dermatitis may develop other forms of allergies as they age, for instance, allergic rhinitis and asthma.

Atopic Dermatitis Atopic dermatitis is a condition that affects 10-20% of children worldwide. Infants begin to display symptoms from the age of 2-3 months, while up to 60% of sufferers will experience symptoms during the first year of their lives.
User rating: 3 out of 5 with 2 ratings