Over-consumption of alcohol can affect the brain in numerous ways, both in the short- and long-term, including impairment of memory function, cognitive skills, comprehension, reasoning ability, behavior, movement, personality and mood. It has been reported that memory loss from long-term alcohol consumption accounts for up to 9-24%* of these cases, depending on the length of time spent drinking, the amounts being consumed and the type of alcoholic beverage being drunk (each alcoholic beverage differs in its alcohol content). Other factors also come into play, such as drinking behavior and time spent not drinking.

Drinking alcohol more than three days per week is considered unsafe. The amount of alcohol should not exceed 14 alcohol units per week for women and 21 units for men. Click to find out how many units are in different kinds of drinks.

The impacts of alcohol consumption on the brain

After consumption of an alcoholic beverage, alcohol is absorbed into the bloodstream and passed directly through the brain, damaging brain cells. The damaged cells are unable to process waste as well as before, while fewer neurotransmitters are produced and brain tissue is damaged more quickly and easily than usual. Cerebral atrophy may also occur alongside damage to these brain-supporting cells. Moreover, alcohol can negatively impact the absorption and processing of vitamin B1, leading to a deficiency that, when occurring in conjunction with other mineral deficiencies for alcohol users, might result in the brain being damaged even more quickly.

Alcohol affects females more adversely than males due to differences in several factors, including those associated with sex hormones, weight and body fat levels.

In addition to the negative impacts on a person’s brain and central nervous system, alcohol can also adversely affect other nerve functions, including:

The doctor will inquire into the patient’s history of alcohol consumption, including the type and amount of alcohol consumed along with other general drinking behaviors. The doctor will also assess any chronic health disorders by performing a full body checkup to analyze central nervous system function, musculoskeletal function, reflexes, balance and issues associated with the autonomic nervous system such as regulation of blood pressure, body temperature and pulse rate. A memory function test will also be carried out in conjunction with additional laboratory tests, such as checking blood albumin protein levels, liver function, vitamin B levels, blood glucose and cholesterol levels. Brain imaging may also be used for diagnosis. All of these steps will be compiled to provide a summary of the amount of brain damage that has taken place.

Some cases of alcohol-related brain damage are misdiagnosed as the early stages of Alzheimer’s disease. However, alcohol-related brain damage differs from Alzheimer’s disease in that the condition can be improved through proper treatment and prevention against further damage is possible. Carrying out the appropriate screening can therefore significantly increase the likelihood of a rapid and successful treatment.

The most important thing to do is to give up drinking alcohol altogether. This will go a long way toward reducing the toxins that enter the body and directly damage brain cells, thereby allowing those cells to recover. Treatment for vitamin B1 deficiency can be undertaken through intravenous administration of vitamin B1 supplements. This will be particularly effective in cases where existing brain damage is minimal. Undamaged parts of the brain are able to make a full recovery in these cases. Such treatment can also play a part in reducing other complications, such as mineral deficiencies, high blood glucose levels and high cholesterol.

High dose injections of vitamin B1 over a period of 5-7 days are dramatically effective when used to treat patients who have suffered brain damage resulting from vitamin B1 deficiency.

If you are a heavy drinker experiencing any of the aforementioned symptoms, it is highly recommended that you consult a doctor in order to undergo a thorough screening to ensure you remain in good health.

Alcohol-Related Brain Damage Over-consumption of alcohol can affect the brain in numerous ways, both in the short- and long-term, including impairment of memory function, cognitive skills, comprehension, reasoning ability, behavior, movement, personality and mood.
User rating: 0 out of 5 with 0 ratings 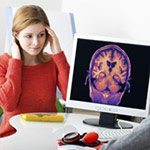